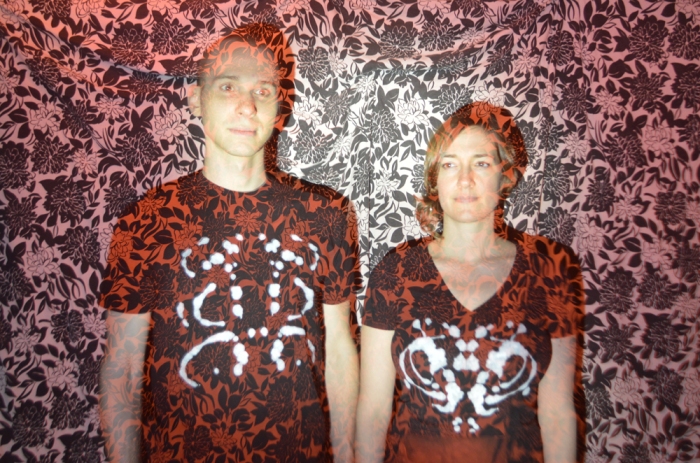 Portland, Oregon​’s​ There Is No Mountain, ​a married duo ​who specialize in complex psych-pop​ that draws comparisons to Dirty Projectors, Buke & Gase and Fleet Foxes, will release their sophomore full-length Luna on January 15th from Org Music on CD and digital formats.​

There Is No Mountain, comprised of drummer/vocalist Kali Giaritta and guitarist/vocalist Matt Harmon and named for the Donovan lyric ​(and the zen koan that inspired it​)​, approach songwriting like composition, starting with a simple song and developing more difficult arrangements, adding percussion and guitar effects. The pair, who played NYC’s Lincoln Center of the Performing Arts as part of last year’s American Songbook series, keep the complexity a layer beneath the surface​, primarily impacting audiences with their ​infectiousness and ​palpable chemistry, as they combine elements of Americana, folk, psychedelic rock and pop, classical and world music, and even occasionally metal.

​The band released a pair of 3-song EPs in 2015 comprised of tracks from the 12-song album Luna, entitled Sea of Storms and Sea of Islands. As guitarist Matt Harmon told Vortex Music Magazine, the new releases are named for several “seas” on the moon, with this record highlighting the couple’s stormiest songwriting to date. “We’re working with the moon theme because a lot of these songs deal with heavier, darker themes in our own lives, and we’ve spent a lot of time walking around at night, sharing a joint and gazing at the moon, drawing a sense of perspective and peace from it,” Harmon says.

Written while on the road, most of Luna’s songs evolved throughout the band’s travels. Playing over 250 shows in 40 states between 2012 and 2014, crashing with strangers met on CouchSurfing.org, Giaritta and Harmon gathered a whirlwind one-city-per-day impression of the country while writing the album. Ultimately, Luna became a record of their own exploration of the highs and lows that come with the touring lifestyle. Starting with the second track “Sadness,” the band embraces the desire to “just ‘listen’ to moments of sadness, doubt, anger and anxiety,” and allow them to be honest reactions to the world, instead of attempting to cover them by putting on a fake smile and waiting for negative emotions to blow over.

Following “Sadness,” the album spirals downward, progressing through optimism, longing and questioning, finally hitting the emotional low point of “Black Hole (Part 1)” and “What If?” — two down-and-out examinations of fear and depression. Through indulging in this trip to the dark side, the album’s emotional pay-off comes in the form of the album closer “Song of Seikilos,” the duo’s take on a 2000-year-old mantra about living in the moment and letting grief go, acknowledging that, no matter what, time will erase everything they try to hold onto. “’Seikilos’ isn’t a white-washing of emotions,” says Harmon. “It’s a hard-won expression of peace in the middle of a storm that started with the album’s early determination to ‘listen to sadness.’”

The new music was recorded utilizing the band’s minimal live performance set-up, built around a live take of guitar and drums and incorporating their blend of effects pedals, a motley collection of toms and snares with dishtowels muting them and assorted hand percussion, piano and organ sounds, and two voices. The recording faithfully recreates the live touring arrangement, showcasing the band’s impressive fullness. Utilizing a similar set-up, There Is No Mountain played a well-received set at Volume Festival in Spokane, and Treefort Festival, where The Oregonian‘s David Greenwald called There Is No Mountain “the most unique act I saw.” Audiences often express surprise at the abundance of sound created from the duo’s acoustic guitar, minimal snare/floor tom/aux percussion setup, vocals and single keyboard, which they worked to capture accurately on Luna, recorded at Map Room Studios and the band’s own home studio with production, mixing and mastering by Matt Harmon and assistant production by Leigh Marble.​