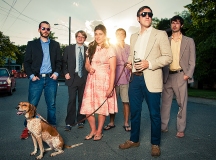 “Travel is something that greatly colors the Beams catalog,” says Adam Brock, front man and principal songwriter of Charlottesville, VA indie pop band, Borrowed Beams of Light. In early 2013, Brock traveled with his wife to South Africa, where he found inspiration in the country’s dualities, particularly the unique juxtaposition of urban areas and untamed wilderness. On The Wings Of A Bug, the second full length from the band, creates a similar balance between pastoral folk, experimental textures, and catchy power pop.

Kicking off with the propulsive opener, “Songbird Bouquet”, the record travels across an ever-changing landscape of musical terrain, from the infectious and driving title track to the frenetic stomp of “Dogs Won’t Bite,” before moving into mellower territory with the hauntingly beautiful “Machines” and the ethereal “Getting There.”

The album was recorded over the course of nine months in various spots around Virginia. Basic tracks were laid down at White Star Studio and overdubs took place in various locations (a winery in Purcellville, basements in Charlottesville). To assist with the recording, Brock employed his usual group of co-conspirators, including frequent collaborator Nate Walsh, and the members of the live iteration of the band.

Taking inspiration from influences such as Tusk-era Fleetwood Mac and eccentric songwriter Robyn Hitchcock, the record revels in the beauty that extends from the chaos of the natural world, and mankind’s attempt to mold that chaos into something which is meaningful and honest. Brock says, “The album is about small things; small bad things that add up to large bad things [and] the small good things that end up feeling the most meaningful and beautiful. I’ve tried to take my problems and fears and anxieties and rework them into something much prettier than those things have any right to be and I hope [these songs] make people feel better the way they’ve made me feel better.”