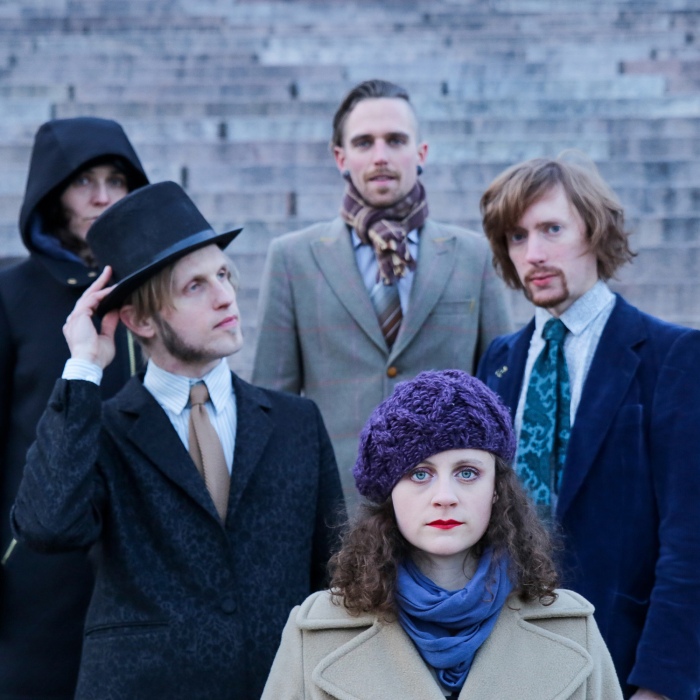 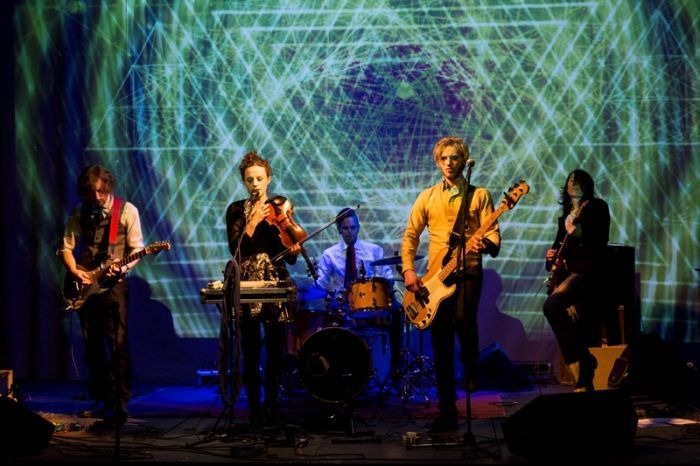 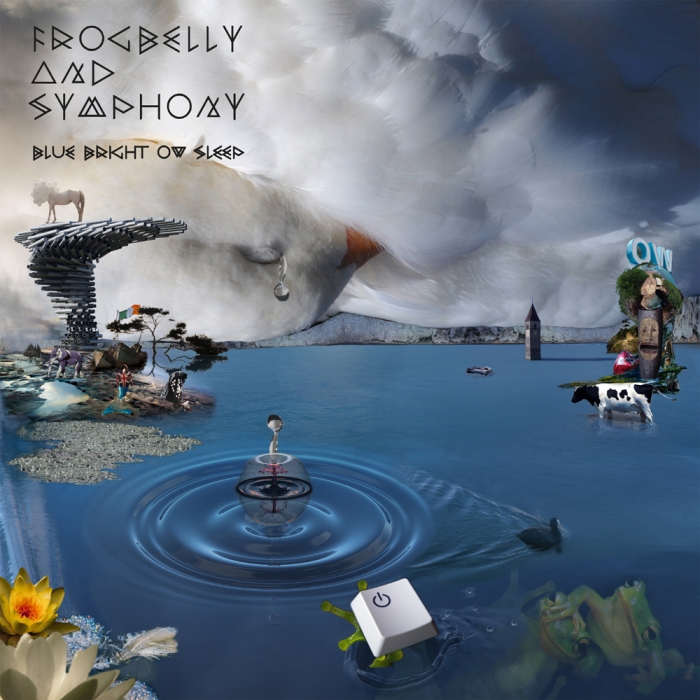 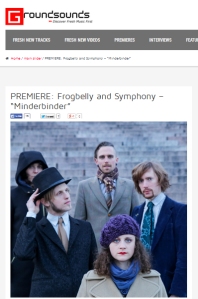 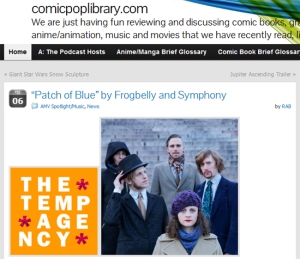 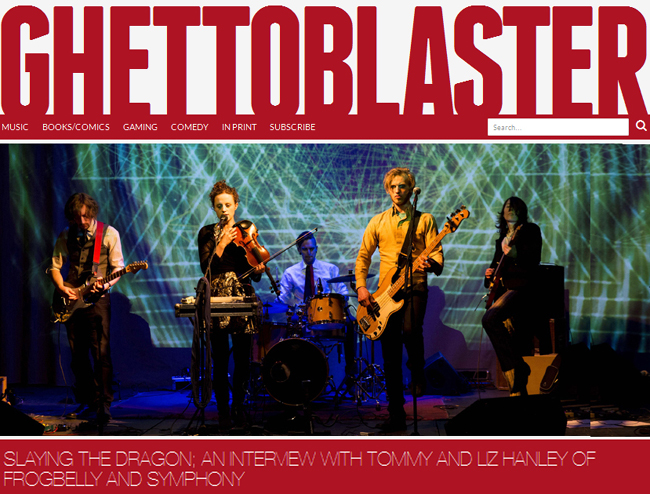 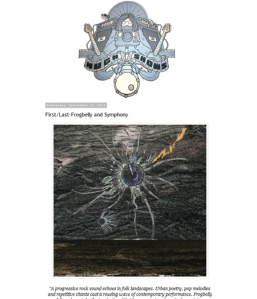 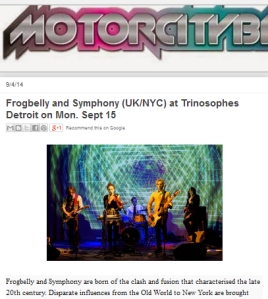 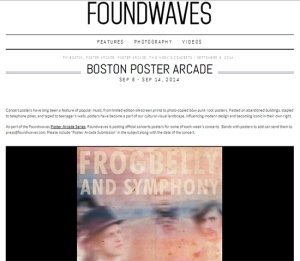 Frogbelly and Symphony are born of the clash and fusion that characterized the late 20th century. Disparate influences from the Old World to New York are brought together in the furnaces of Sheffield and Brooklyn, revealing a stylistic repertoire that injects the indigenous workingman’s soul into the periphery of the bohemian metropolis. Academically trained in traditional instrument playing and constantly experimenting with production techniques, the band systematically processes every imaginable acoustic influence.

Coming from an experimental post-punk and noise approach on their 2013 debut the EYE (Labelship, UK), Frogbelly and Symphony are now presenting their forthcoming full-length!

The opening track Minderbinder is an ode to Joseph Heller’s Catch 22 war profiteer anti-hero Milo Minderbinder. Dedicated to the opportunistic existentialist punk in all of us who strives for unjustifiable, self-centered, ambiguous success. Arpeggiating guitars and bass underlie dense verses. A violin and guitar unisono then floats over Ray Rizzo’s thundering beats.

Patch of Blue, which debuted on WFUV’s UKNY show in October, is a sharp bit of urban poetry, a handful of movements packed into just over 4 minutes of music that grows out of an explosive introductory crescendo, giving way to Liz Hanley’s powerful lead vocals and distantly haunting descants while pursued by Tom’s smooth legato refrains. Liz doesn’t coo for long before the quilt of chorusing vocals gives way to a pounding cacophony, eventually descending from the chaos again to close on Liz and Tom’s lilting canonical quip: “Here’s your moment of clarity, shackled to a tree.”

Shingle, an earthy folk exploration led by Tom’s vocals and full of soaring violin and propulsive drum rolls, came to life after a swim in a water reservoir in the Peak District west of Sheffield called “Ladybower”. In 1943 when the village was flooded due to the building of a dam, the spire of the church remained sticking out above the surface of the reservoir until 1947 when, as local lore has it, it collapsed (or more likely, was dynamited for safety purposes). Getting more and more immersed in Irish and English folk music Tom was deeply moved by the power of folk tunes and traditionals passing on a spiritual, intellectual, political and emotional heritage. Tom and Liz have fortified their private and artistic liaison and got married in 2013.

The allegoric and brutal dirge Organism was inspired by a couple of near-death experiences. The lyrics are mined from then-14 year-old Liz’s diary, documenting her brush with drowning on a family beach holiday. The music came from the circumstances surrounding Tom nearly falling from a chandelier above the sanctuary of a 16th century church. His ecclesiastical near suicide mission was to capture the sound of the church pipe organ. The organ recording sat in a box for years, and upon re-discovering it when unpacking some boxes, Tom and Liz fell in love with the opening chord progression of the song, originally composed by the organ concert celebrant’s wife Johanna Renate Woehlke and took the track to Brooklyn, where it was finished in Bisi’s studio by Ben Trott and Ray Rizzo and an opulent string ensemble, arranged by Emanuel Ayvas.

The band has become a canvas of its members’ collective experiences and intellectual exchange. Often their ideas have previously been articulated by great writers throughout the ages. Frogbelly and Symphony idiosyncratically appropriates, shares and recreates words and tunes. They are not afraid to quote what has already been said perfectly: John Clare’s An Invite to Eternity, put into music by Tom’s friend Aaron Deveson who now teaches English literature in Taiwan. Rumi’s Ache and Confusion has left an imprint on Frogbelly’s writing, as well as fragments of Joseph Heller’s Catch 22 and Langston Hughes’ Vari-Colored Songs. The music to Leyla’s Find was originally composed by the band’s friend Leyla McCalla and first appeared on her solo debut of 2014. It is Blue Bright’s bestowed cover song, dedicated to their friend and proprietor of the idea who gave Langston Hughes’ work a contemporary musical garb.

Conceptually, Blue Bright Ow Sleep has been developed while playing 100+ shows in Europe, UK and US since they began performing in 2012. With band members living on both sides of the pond, it has been a challenging yet inspiring journey through a surrealist world of dark and light, blue and bright, war and peace and truth and lie.

Singer, bass player and composer Tom Hanley (formerly Thomas Lebioda) grew up in Hamburg Germany together with his Polish immigrant father. Asserting himself into escaping a prejudiced and conflictive bourgeoisie that he couldn’t identify with, he first started playing bass in anarchist punk circles, slowly branching out into territories more affiliated with experimental music and art. Concurrently he developed interests in songwriting, arranging, recording and production. In 2009, in the course of playing a tour with a Sheffield band, he decided to move to the UK. Sheffield has been his adopted home for 5 years. Tom is now by status pendular between South Yorkshire and Brooklyn.

Singer ,violinist and Keyboardist Liz Hanley grew up in a traditional Irish-American family in Boston and studied classical violin at NYU, where she met ethno-musicologist and musician Mick Moloney. With tireless dedication and through countless folk sessions around NYC, Liz established a career as folk musician. Her debut solo album “The Ecstatsy of St. Cecilia” came out in 2013 and features an international lineup of traditional folk players such as Jefferson Hamer, Cleek Schrey and Eamonn O’Leary. She also plays in Brooklyn rock band Emanuel & The Fear.

Guitar player Ben Trott studied classical and jazz guitar in Sheffield and is an integral member of UK’s traditional folk scene. Besides many a project he currently tours with English folk ambassador Tim Edey. Trott hails from an English family, deeply rooted in folkloristic traditions and his father is a passionate Morris-Dancer. Trott cross-links traditional playing, jazz-rooted improvisations and brutalist rock barrages into a sound that is as distinctive as it is versatile.

Drummer Ray Rizzo is a highly sought-after player with an endless and extremely varied list of credits, ranging from Glen Hansard and Yo Yo Ma to Michael Shannon, King Kong, Days of The New and several theatre productions. Rizzo is also the initiator of the Motherlodge Live Arts Exchange that produces festival-like performance programs in Louisville KY and New York City. In 2014 he released a debut record with his noir Americana project Mesiko.

“Nowadays we’re blessed with the possibility to take the inspirational tint from centuries of musical and lyrical repertoires. You may describe our work as a subjective look on an inexhaustible miracle.” – Tom Hanley