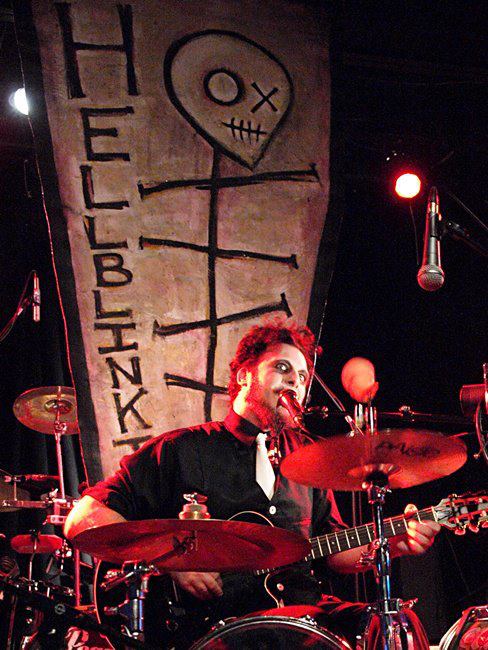 HELLBLINKI
Many years ago while living in the land of Durham, North Carolina, a young lad named Andrew recieved his tax check and went out and bought himself a cassette tape 8-track recording device. Soon, he and his friends were gathering on Sunday evening for celebration and Meatfest (a strange ritual in which nothing but grilled meat was eaten, and much wine, herbs, and – in the summer months – Mint Juleps were often consumed). The recordings made during these Sunday bacchanals became the basis for The Hellblinki Sextet Self-Titled Debut released sometime around the turn of the century.

The tapes made during these sessions eventually travelled with Andrew to Augusta, GA where his new friend and technical adviser “Ken” encouraged him to finish the record. With a spring in his step and a dream in his heart, Andrew finished the record, built an impressive flash website, ordered T-shirts, and waited for his genius to be discovered. A dedicated Dutch DJ soon stumbled onto the record and exposed the complete Hellblinki Sextet self-titled debut album on public radio, generating raucous acclaim from the Netherlands and Norway. Athens, GA station WUOG also provided airplay, keeping it (and subsequent recordings) in rotation for many moons.

On Nov. 11, 2000, Andrew’s own venue The Hangnail Gallery played host to Hellblinki’s debut performance. It was a grand occasion only slightly marred by the percussionist’s complete mental breakdown the day before the show (he left a note on the door that he was unable to do the show – luckily, “Woodshop” John filled in admirably). Four years later, Augusta’s own “Theatre Beautiful”, The Imperial, which opened in 1918, was the chosen venue for the release of Hellblinki’s sophomore album A Pirate’s Broadcast. The lobby area was bedecked with Andrew Benjamin’s giant paintings – wooden cut-outs representative of the album artwork – and in front of the theatre, local fire troupe Pyroteque lit up the night. A few weeks before the show, long time female vocalist Danielle Purcell announced that she’d be leaving the band and moving to Schenectady. She returned to Augusta for the performance. The night before the show, the horn player was arrested for check fraud and was replaced by occasional Hellblinki contributor, fiddle player Henry Wynn III.

Work soon began on their next album, and Hellblinki planned a big blowout before leaving Augusta for their new hometown of Asheville, NC. The band performed much of what would become their 3rd album Oratory – Andrew arranged new songs and samples to a 16mm film by splicing ancient library films together into a new storyline. Additional video, including video feedback, were provided by Projexorcism. “Behind the Masque”, a guerilla theatre troupe known for their Augusta street performances, collaborated with Benjamin to produce a series of scenes acted on stage that mirrored both the storyline of the film and the lyrics of the songs. Pyroteque again lit up the night, cigarette girls enticed the crowd with noisemakers and toys, Athens, GA band Hope for a Golden Summer and New Orleans natives, The Zydepunks (who were displaced by Katrina the week before the show) joined in the madness. Local filmaker Stephen Gilliam produced a TV commercial that aired on comcast in the weeks before the show. Hellblinki was a 12 piece band for the shindig, and at least 50 people were involved in producing the show. Properly sent-off, Hellblinki left for new stomping grounds.

Hellblinki – in addition to creating a stage show with over 50 performers/multimedia/video/snow and staging it in a restored vaudeville theater in Augusta GA – has been introduced by James Brown on television, accidentally murdered a live fish while driving a minivan, has literally been passed out upon by an audience member on a moving bus while performing, performed for at least one exclusive private preparatory school, played on while a man dancing in his wheelchair attempted to set an American flag on fire (which was attached to a woman’s motorized wheelchair, as she was also dancing to the band), almost got in a great deal of legal of trouble in a casino in Fargo ND for building the prow of a pirate ship on the front of their building (complete with a nude demoness figurehead) as part of a Halloween party, released an Xmas EP, and wants very badly to do a houseboat tour with lots of frozen drinks.

Hellblinki has been known to perform as a true sextet, composed of male and female vocalists; acoustic electric and bass guitars, brass and woodwinds, multiple percussionists, violin, keyboards, samples, radio, and various toys and empty wine bottles. Hellblinki has also been incarnated impressively as Andrew-the-one-man-band (aka The Hellblinki Chamber Ensemble) on guitar, vocals, drums and the occasional cornet, after Mr. Benjamin decided, inspired by his noise musician friends who were able to tour Europe alone with a keyboard, to ditch the band and learn to play drums with his feet.

Currently, Andrew Benjamin is joined by Valerie Meiss on many instruments (accordion, melodica, glockenspiel, toy piano, ukelele, handsaw, various percussion, and an instrument she calls a cacaphonium, on occasion) plus one huge voice, her guerilla operatics interwoven beautifully with Andrew’s deep thrilling baritone. The two are backed up by JonPaul Hess on bass (electric or upright, depending on his whimsy), organ pedals, and keytar. Hellblinki recently released their 4th studio album, These Bubbles Come From Ants, and with it, they’ve come full circle; Jason LeFarge at Seizures Palace in Brooklyn, where much of the album was recorded and mixed (and which shares space with Martin Bisi’s storied BC Studio), was in the Atlanta band “Pineal Ventana”, who played Hellblinki’s first show. The band followed the full-length up with a 7″ single, All For You/I Am, which was recorded by Andrew Benjamin at The Hall of Justice in Candler, NC and mastered by Kitchen Mastering in Carrboro, NC.

Hellblinki tours tirelessly, taking its raw pirate blues into the bloody public arena with careless abandon, and has been seen conquering entire unwary audiences: victims halt conversation, quadruple their drink orders, and dance like mad drunken fools, joyously participating in the madness boiling over the boards. Andrew, Val, and JonPaul ply the anxious crowd with noise-making trinkets and urge frenzied participation, if only with their own soused howls and grunts. The band puts on a masterful live performance – odd, demented, bizarre, fun, and intriguing, Hellblinki creates a world from found sound, pirate songs, and dirty south blues. The lyrics are philosophical, the tunes are odd and catchy, and Hellblinki ushers the audience into a grinningly sinister world, not quite like our own.

These Bubbles Come From Ants (2010) [one sheet][album artwork]